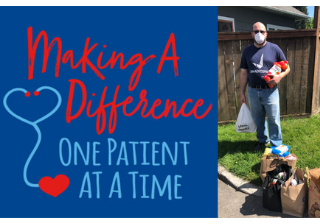 Meet Robert.*  He is a HealthPoint patient and a member of the Tukwila community.  Robert was recently released from prison and has been working to get his life back on track. Things were going well until a couple of weeks ago when he woke up feeling like he'd been hit by a bus. It was Covid-19.

Robert's doctor told him to self-isolate while he recovered, but Robert lives with 15 other people in transitional housing. Because of the close quarters, his housemates were exposed to the virus and their house went into quarantine lock-down.

Before getting sick, Robert struggled to find steady work. Many employers were unwilling to give him a chance because of his record. His housemates had similar experience and finances were tight even before the outbreak. After being quarantined, money and food quickly ran out.

Robert called the local food bank, but delivery wasn't available.  He and his housemates couldn't afford Instacart or other delivery services. They were stuck. They didn’t want to put other people’s health at risk, but they needed food.

That’s when the phone rang.

HealthPoint staff member Anh Tran was on the other end of the line.  Anh is an acupuncturist, but she redeployed to support our Patient Engagement Team during the outbreak.

Anh does daily outreach to patients who have tested positive or are suspected to have COVID-19. The goal of her phone calls is to let patients know that, even though they are physically isolated, they are not alone. HealthPoint is here to help them stay safe, healthy, and connected to any resources they might need.

These calls can be a lifeline for patients like Robert.   When Anh heard about his food situation, she immediately sprung into action.  Her first call was to Patient Engagement Supervisor Brenda Castro. “I spoke to Brenda about reaching out to additional local food banks to see if they delivered,” said Anh. Unfortunately, all the foodbanks were at capacity for delivery and many were running low on supplies. Anh was undeterred. “I decided that I'd connect with my neighbors here in Beacon Hill.” Within ten minutes of sending an email request, Anh received many responses and food donation offers: “I feel pretty lucky to have amazing neighbors.”

Meanwhile, Brenda had a lead on a food pickup. She drove to an Auburn food bank and described it as “an eye-opening experience.” The shelves were mostly bare, the small amount of fresh food was far from fresh. “I’m glad I went,” said Brenda. “It allowed me to walk in my patients’ shoes and to realize what my mom went through when I was little. It also made me grateful for my own resources.”  Brenda decided to use some of those resources to support Robert and his housemates. “I had an extra sack of oranges and some spinach and cherry tomatoes that I’d just bought; I knew they needed them more than me.”

With food in hand from Anh, her neighbors, the food bank, and Brenda, the question became: how to get it delivered to Robert?  The Patient Engagement Team doesn’t have a protocol for this type of work, so Brenda called Kristen Raftis with our Development Team. “I had heard from Kerry Gallo (HealthPoint’s Patient Engagement Manager) that we might be getting a grant to support food delivery,” Brenda explained.

Kristen was happy to help. A former restaurant owner, she is passionate about fighting hunger.  While the grant was not yet operational, Kristen knew that the Tukwila Connection Desk had experience with getting food delivered to patients. She quickly connected Brenda with the Connection Desk Manager, Lina Stinson.

Lina is quite likely the best-connected person in south King County. She is like a walking rolodex, nay, supercomputer of resources and services. Sure enough, when Brenda called, Lina knew just what to do. Team Tukwila (where the Connection Desk is located) already had a protocol and weeks of experience with delivering emergency essentials to patients in need. Lina was working from home, so she called Tukwila Quality Improvement Coordinator, Evelyn Gonzales to see if she could help.

If you’ve met Evelyn, you know that she is passionate about helping people.  As a former HealthPoint Client Services Representative, Evelyn is accustomed to finding creative ways to connect patients with resources: “I’ll do everything I can to reduce barriers for our patients. Sometimes that means dropping off a gift card, or groceries, or even a microwave!” When Lina called, Evelyn immediately offered “to do whatever is needed.”

Within three hours of that initial phone call, Robert had food in his fridge again. 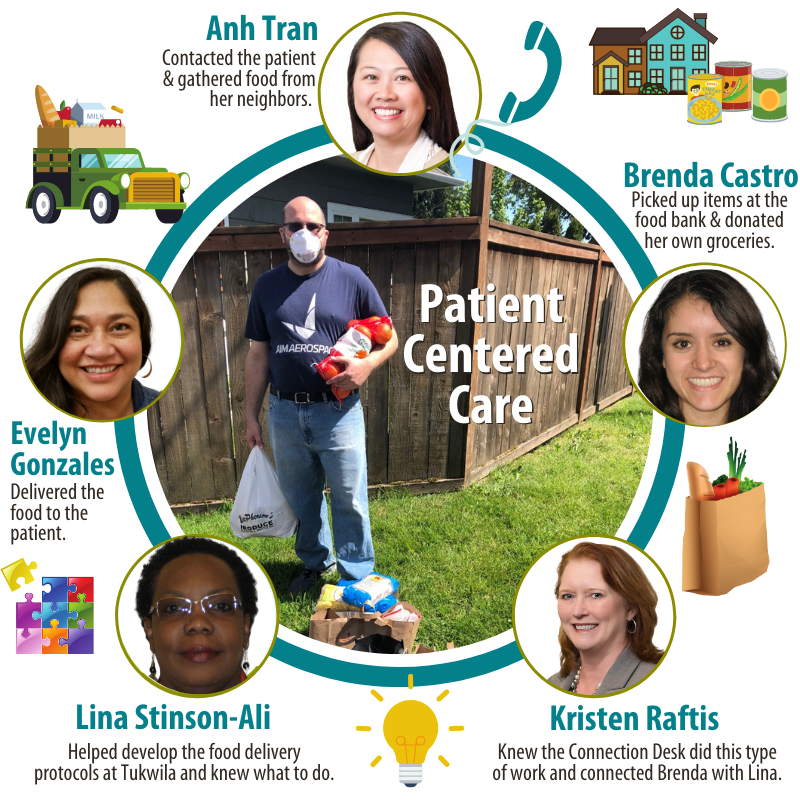 This kind of all hands-in, cross-team collaboration epitomizes the holistic, integrated, patient-centered care that HealthPoint strives for.  Our staff aren’t looking to simply mark a check box or go through the motions of helping someone; they genuinely care about our patients and want to support them in living healthier, happier lives.

It would have been easy for Anh to go through her checklist, give Robert a phone number to dial, and wish him good luck.  Instead she listened to his needs and then did everything in her power, including pulling in a passionate team, to support him.

Thank you to these and to all our staff for moving mountains to put our patients at the top.

Midway clinic pharmacy will be open Saturday, February 4th 8am to 1pm.